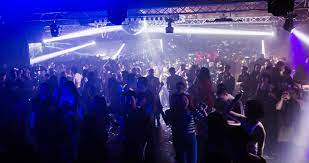 Located on the north side of Arcology Row in downtown Los Angeles, Abaddon is a club known for its goth/fetish/industrial scene. The club is frequented both by locals and by a variety of gang members, but serves as a sort of “neutral ground”—there are no fights at the club, and security is quiet and swift. The club itself is three stories tall, made of old block concrete from the previous century. Somehow, the club has managed to remain open and privately owned, even though it’s on prime real estate just across from the Gap Inc. Arcology building.

The club has a massive dance floor on the bottom level, and a maze of side rooms on the second floor. There is a well-stocked bar adjacent to the dance floor, and a shawarma grill on the second floor. There are multiple back exits and a roof with patio, where people frequently go to smoke while watching people on the street. Folks looking for a quick bite of something other than shawarma will cross the street to the south and enter the bottom floor of the Gap Inc. Arcology building and get diner food from the Banana Pancakes 24-hour deli counter.

Various performers and escorts work here as well, selling their company and services for an additional fee.

The owner of the club is a reclusive woman named Annabelle.

by: JesseHeinig
See All Pages

I'm sorry, but we no longer support this web browser. Please upgrade your browser or install Chrome or Firefox to enjoy the full functionality of this site.